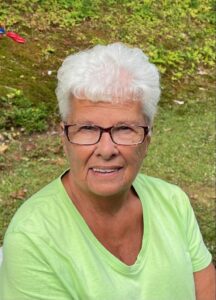 A visitation for Carolyn will be held at the Carson-Stapp Funeral Home in Ogden on Sunday 20 November from 5pm to 7pm. Her life will be celebrated Monday, November 21 at 10:00 am during funeral services at the First Assembly of God in Boone, Iowa. Pastor Don Beal will officiate. Cremation follows. At a later date, Carolyn’s ashes will be distributed in a private ceremony at her “happy place” in New Hampshire.

Carolyn Kathryn O’Neil was born on September 17, 1943 in Brooklyn, Kings County, New York to Kenneth O’Neil and Kathryn (Sherack) O’Neil. She was raised in Jackson Heights, Queens County, NY, where she spent her formative years attending Catholic schools. She graduated from St. Vincent Ferrer, an all-girls Catholic high school, in 1961.

After high school, Carolyn left New York and attended Monticello Junior College, an all-female college in Illinois, where she earned her associate degree. She then transferred to Drake University, where she met Daryl, whom she later married on June 5, 1964, before receiving her teaching degree. They were married at Swede Valley Lutheran Church in Ogden, Iowa, a historic church cherished by generations of the Johnson family. The couple lived first in Boone, then in Des Moines, later in Payton and finally in Ogden, Iowa, where they continued to raise their 5 children on a farm.

When Daryl and Carolyn first started bringing children into their lives, Carolyn’s life was shaped by being a beloved mother and homemaker. She initially put her career on hold but later took up substitute teaching and eventually lived her dream by teaching her own classroom in East Greene. She went back to school and earned her Master of Arts in Special Education the year her youngest graduated from high school. As her children began to move away, she visited grandchildren in the Kansas City area, where she over time took a position as homeroom teacher and worked for another 9 years before finally retiring in 2013.

Carolyn was very proud of her New York heritage. She long admired the New York Police Department after her father retired as head of the New York Bomb Squad. She also loved food, remembering Chinese food, Katz’s Deli, and bringing back the most extraordinary NY cheesecake recipe she would make over the holidays, which was coveted. According to legend, her father stole it from a famous NYC restaurant. Sometimes her accent would disappear with words like “harrible, soda” and “ahmond,” to the delight of her children’s friends.

When Carolyn got married the joke was she couldn’t even boil water! Luckily, her wonderful mother-in-law, Ruby Johnson, tutored her, taught her how to cook and bake, and helped Carolyn hone her skills. She was a natural in the kitchen! Carolyn enjoyed cooking and baking everything from scratch, as she put it. She found it gratifying when her appetizers, meals, and desserts brought joy to others, especially her family. Whatever event she attended, whether it was a church meeting, a school function, a bridal shower, or a holiday, Carolyn’s food was very popular.

Carolyn’s Aunt Anna, or Aunt Danna as she was affectionately known, was a professional seamstress in New York. She taught Carolyn to love sewing. From a young age, Carolyn sewed many types of clothing for her children. She had a large sewing room in her basement with a custom closet and closet to store all her sewing supplies. Countless hours were spent cutting out patterns, pinning fabrics together and finally sewing masterpieces. She made outfits for her children’s and grandchildren’s christenings, graduations and numerous special occasions. Carolyn also enjoyed knitting, making beautiful blankets, scarves and practical everyday items like tea towels, which her daughters and daughters-in-law loved.

Carolyn grew up on the east coast, enjoying summers on her parents’ lake property in New Hampshire. As an adult her love for New England grew and she continued to travel there each summer to share her “happy place” with her children and eventually her grandchildren. She was delighted to be able to help create some of the same memories for her family that her father shared with her long ago. She made many friends in New Hampshire and was already making plans to visit next year.

Carolyn loved her family and friends. She enjoyed Girls’ Night Out, or GNO as she would shorten it, with her KC teacher friends. She loved family picnics and spending time with friends in other states and often traveled to see them. She cherished the hugs and kisses of her grandchildren, the time she spent attending concerts, dance performances, figure skating competitions, soccer and basketball games, and countless other special events in her family’s life. Carolyn was the life of the party, with an infectious laugh and a knack for telling stories. She was admired for her dedication to her family, her courage, her good advice, her love and care for disadvantaged children, but most of all for her personal relationship with Jesus Christ.

Carolyn was died by her parents and her brother, Kenneth O’Neil, Jr.

Donations can be made as follows: