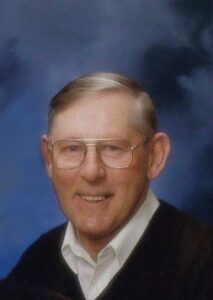 A visitation for Gene will be held on Monday, November 14, 2022 from 5:00 p.m. to 8:00 p.m. at the Carson-Stapp Funeral Home in Ogden, Iowa. A private family grave ceremony will be held at Union Cemetery in Boxholm at a later date. For online obituaries and condolences, please visit: www.carsonstappfuneralhome.com

Gene Donald Reutter, son of Donald and Mabel (Hedblom) Reutter, was born on June 10, 1943 in Ogden, Iowa. He attended the Grand Community School in Boxholm, Iowa, graduating in 1963. He enlisted in the National Guard in 1963 and was honorably discharged in 1969.

On June 3, 1967, Gene was married to Karen Ann Lennon at St. Joseph’s Catholic Church in Duncombe, Iowa. The couple lived and farmed in Grant Township near Boxholm for 43 years. Gene and Karen moved to Ogden in 2009. Karen passed away on January 31, 2014.

Gene fondly remembered growing up on the farm with his brothers and sisters. Gene loved to share stories about the mischief they would get into, as well as the nicknames they are all now known by. Because of this, many in the community only knew him as “Jake.” In his teenage years, he enjoyed playing basketball and baseball in the Grand Community. He often boasted that he sold his first car, a ’61 Ford Galaxy, to purchase his first tractor, an Allis-Chalmers XT190, shortly after graduation.

What Gene enjoyed most was being with his friends, driving around checking on the crops, spending time with his family and eating a good steak. He was the most generous person and always had a smile or laugh on his face. He had the best jokes – he was always “excellent in his field”. His most valuable gifts were his grandchildren. His best day was being able to visit or watch them at their school events. He never missed a Christmas or a birthday – he was the best dad.

Memorials can be left at the discretion of the family.