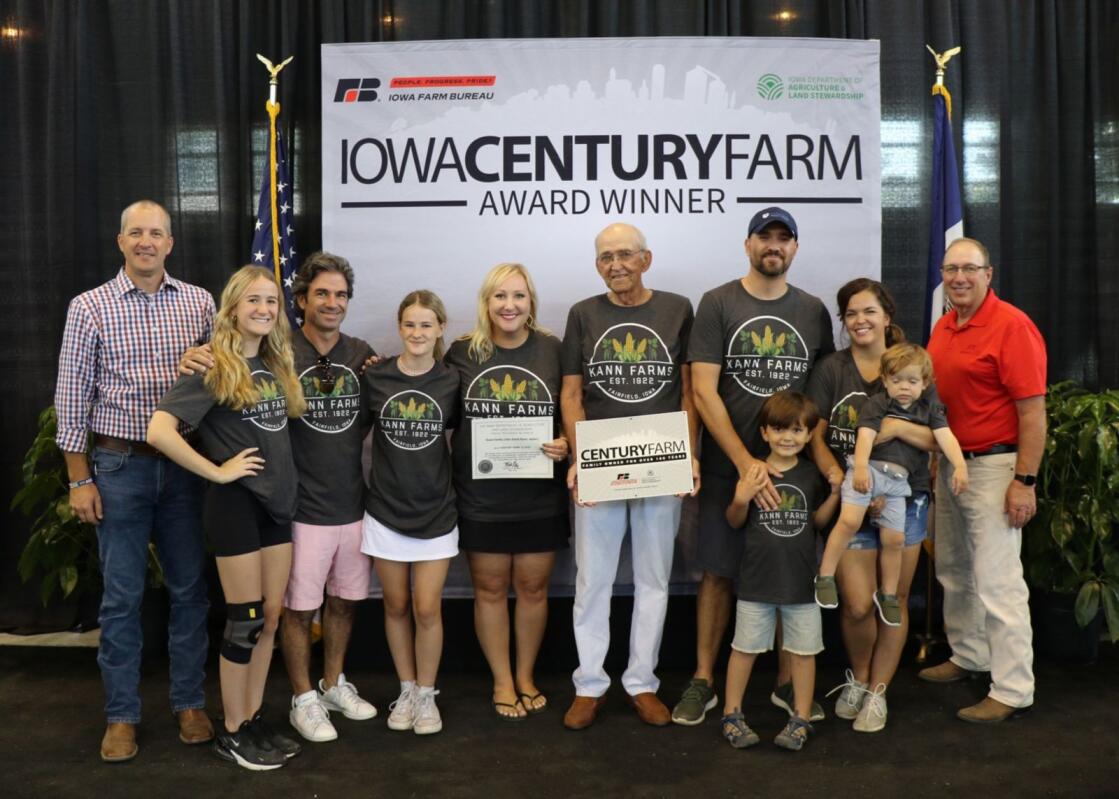 FAIRFIELD – The Kann family farm, a few miles north of Fairfield, was among the farms recognized as a Century Farm during the Iowa State Fair last August.

The farm is owned by John Kann, who grew up in the farmhouse where he lives to this day. Kann worked his 240 acres until 2017, when a cancer diagnosis at age 73 forced him to hand over operations of the farm to a bar tenant.

Kann’s grandfather, Bert Kann, bought the land about 3 miles north of Fairfield off Highway 1 in 1922. He bought it for $200 an acre. Kann said his grandfather needed to take out a $10,000 loan, and with the Great Depression approaching seven years later, repaying the money was no easy task.

“My grandfather paid for this farm to the bone,” Kann said. “The Depression years were tough, and there were at least two or three years when they didn’t have a good harvest to feed the cattle and the pigs.”

Kann said his father was born around the same time his grandfather bought the farm, and he shared stories of what it was like growing up during the Great Depression. Although Kann’s father was a boy at the time, he was old enough to help out on the farm and he told Kann about the horrific chinch bugs that ruined crops in the 1930s.

“Dad said they dug little ditches and put creosote in there to try and kill the chinch bugs,” Kann said. “He said we might as well have sat around the house twiddling our thumbs because it wasn’t a little good.”

The farmhouse where Kann lives today was built by his father Albert in 1948 when Kann was 4 years old. The family demolished the original house that stood there. While the new home was being built, Kann, his sister Dixie, and his parents lived in a small makeshift house on the farm.

Kann graduated from Fairfield High School in 1963. Being the only son, he decided to work on the family farm for as long as possible and later took over from his father when he retired and moved to the city.

Kann married Becky Adam, a woman who also came from a long farming family. For the first 15 years of their marriage, they lived on a homestead north of the family farm, a place he and his family had to clean up. John and Becky had two children, daughter Christi who now lives in Detroit and son Daniel who now lives in Kansas City. For a time the four lived in the farm to the north, but Kann said they moved into the main house south of it because it was nicer.

Kann has fond memories of his wife and mother Maxiene cooking meals for the farmers in the fields to keep them happy during their long working days. In the 1950s, Kann’s father bought a 100-acre farm next door for $400 an acre.

Like most farmers in the mid-20th century, Kann’s family raised livestock such as pigs and cattle, although he said he hadn’t had any animals on his property for several years. He was successful with row crops into his 70s, but his cancer diagnosis prompted him to retire from farming.

Kann’s last harvest was in 2016, and luckily a drone photographer caught it, so Kann has a photo of his combine harvesting that last harvest that now hangs in his dining room. Today his land is leased to Casey Diehl.

“No one in Jefferson County has a bad word to say about Casey,” Kann said.

Kann said that when Diehl took over running the farm, Kann wanted to help as best he could, but not with the heavy equipment. Instead of working in the field, Kann runs errands for Diehl.

“It gives me something to do,” he says. ‘You’ll never see me in this house during the day unless I’m sick. I need to be outside and do something.”

Kann said he was honored to receive a letter from the Iowa Farm Bureau earlier this year showing his farm now qualifies as a Century Farm. His two children and their spouses, grandchildren, family and friends joined him in celebrating the occasion during the Iowa State Fair in Des Moines.

“It was a nice little deal,” Kann said.

John Kann stands in front of his home about 3 miles north of Fairfield on Highway 1. The home was built in 1948 when Kann was 4 years old and he lived there most of his life. (Andy Hallman/The Union)

John Kann’s farm north of Fairfield was named Century Farm this year. The farm was bought by Kann’s grandfather in 1922 for $200 an acre. (Andy Hallman/The Union)

The Kann farm on Highway 1 north of Fairfield has been in the family for 100 years. (Andy Hallman/The Union)

John Kann looks at an aerial photograph of his homestead that he had framed. This photo shows the farm just north of where he now lives, at a house where he and his family lived for 15 years after he and his wife Becky got married. (Andy Hallman/The Union)

Six people were killed in a shooting at Chesapeake Walmart