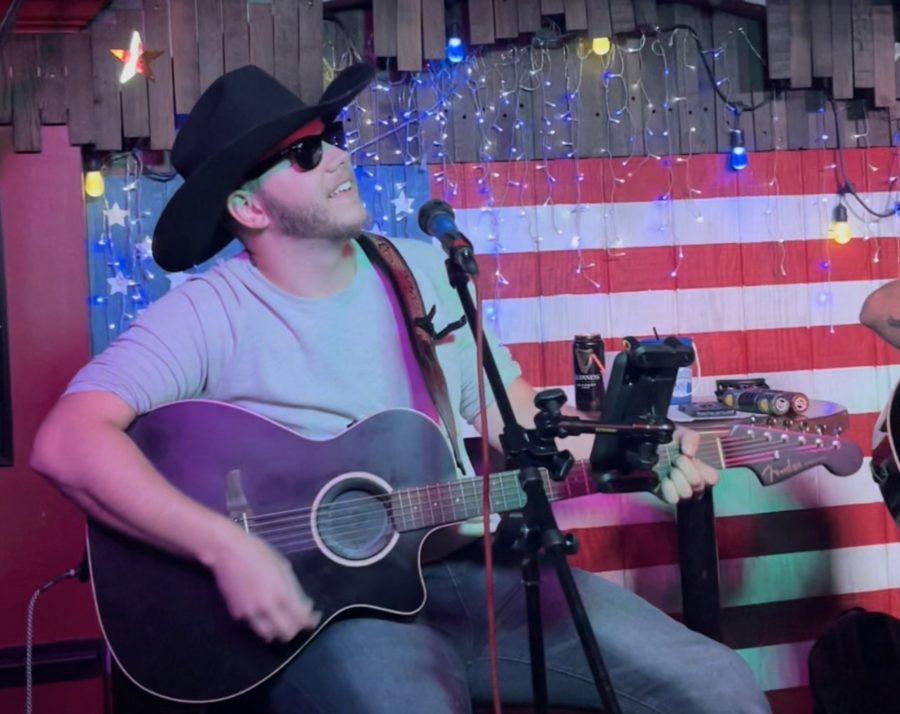 Chayse Abrams, 24, is a local Lexington musician who was born in Harrodsburg, Kentucky and raised in Garth Brooks. Music and family have always been constants in his life. Now, thanks to her support, he’s living his dream of becoming a country singer.

Abrams’ family has lived in Harrodsburg since the 1950s. He said they’d always been “the farmer type” and that his father was a “hard-working family man.”

“I learned in the family what hard work is. My mom always taught me to do what I want and not worry about money or anything like that,” he said. “I owe her everything. Everything I have done I owe to her and my father.”

Abrams said he had the best childhood thanks to his parents.

“It was always just love and compassion in my family. I am truly blessed when it comes to this aspect of my life,” he said.

Love and compassion weren’t the only things his parents showed him. They also introduced him to country music.

His mother turned on Country Music Television to entertain him and his brother.
“I remember, it’s like a vivid memory with my little brother,” Abrams said. “I was seven or eight and we lived in our old house where we used to live, in the middle of nowhere. It also burned and my mother had CMT on. We watched all the country music videos and sang along, and that’s pretty much how it all started.”

His parents went to a Garth Brooks concert while his mother was pregnant with him and he joked that it was his first concert. However, the first country song he remembers was “It’s a Great Day to Be Alive” by Travis Tritt.

He was nine years old when he first got a guitar.

“I remember sitting down and trying to play it, but I just couldn’t. I started to cry. I was angry with myself for not being able to play,” he said. “I was always kind of scared that that would happen when I played in front of people.”

Although country music holds a special place in his heart, it’s not the only genre he enjoys.

“I wasn’t a rebellious kid, but I think the first genre of music I fell in love with was classic rock like AC/DC, Metallica and Van Halen,” he said. “I just love the electric sounds they make. When I got into middle school, the genre kind of changed.”

“It got to the point where I had to change schools because I was being bullied,” Abrams said. “I don’t blame anyone for that, you know, it was middle school. I just didn’t want to take it.”

He asked his mother if he could move schools to high school and she immediately began searching until they settled on a Christian academy in Lawrenceburg.

Around this time, he began listening to more hip-hop, rap, and R&B.

“I loved those bangers from the 2000s,” he said. “I knew every word of every song, but country music was where my roots were.”

He started helping his aunt and uncle on their farm when he was in high school. It was there that he got his first taste of hard, physical work, but he always had music playing as a soundtrack to his day.

When Abrams started singing, he didn’t do it in front of anyone, not even his parents.

“I was afraid I wasn’t good enough. I was worried that people would think of me in some way, but I’ve always sung whether I was locked in my room or driving to school or practice or whatever,” he said.

One day he was driving home from school with a friend and started singing, forgetting that he wasn’t alone in the car. To his surprise, his friend praised his voice.

“But I didn’t think much about it. I just sort of played it off,” he said.

He was nervous singing in front of people, especially when it came to country music, and he explained this is because the genre tends to get a lot of backlash from society.

“But for me, that’s life. A country song can really capture your feelings or whatever you’re going through. People can really connect to these songs,” he said.

In 2016, Abrams enlisted in the United States Air Force and served four years. That’s when he began to wonder if he could make a living from music.

“I was like, ‘I don’t care where it takes me, but I know there will come a day when I put everything I have in it,’ and that’s where I am right now,” he said.

He approached his mother and asked her to get him a guitar and she agreed. He said he never asks his mother for anything, but this was an exception as his birthday was coming up.

He finally taught himself to play the guitar within a few months.

“I spent sleepless nights learning how to play. A few months passed and I wanted to come home. I missed my family,” he said.

He returned home and continued to play and sing. He started posting videos of himself online and people responded well. He met a woman through Facebook and started playing shows for a weekly music party she hosts. Again the audience gave great feedback on his performances.

“People kept asking me to play songs and everyone loved it. That’s when I fell in love with the performance,” he said.

One of his friends asked him if he could throw his birthday party at his farm, and Abrams agreed. Then his friend asked if there would be live music. At this point, Abrams didn’t have a band, so he reached out to a Facebook group for musicians and made it happen.

“It all happened in about five days. I said I needed a band and I got one. it was crazy It was kind of redneck style, but it worked,” he said.

As he walked off the stage, several people approached him and asked why he wasn’t pursuing a music career.

“I was serious before, but then I knew I had to make it a day-to-day thing,” Abrams said. “I told myself I would connect with people and learn new songs, and I just haven’t stopped since.”

Abrams currently has one single out, “Hooked,” which is available on all platforms. A second song entitled “When She” is scheduled for release on December 16th. He frequently performs at local Lexington bars like the Stagger Inn and Two Keys Tavern. All of his show dates are on the Requestor app.

South Carolina flips No. 8 Clemson to slip against rival | Soccer