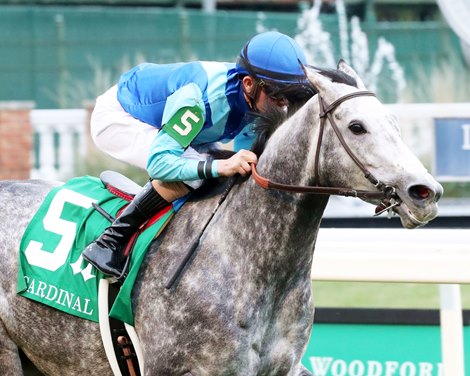 Dalika notched her third front-running graded stakes win of the year as she rolled to a 1 3/4 length win persistence in heat 47 of the $268,500 Cardinal Stakes (G3T) on November 24th Churchill Downs.

Dalika, a 6-year-old mare owned by Paul Vargas Bar Mar Equine, ran 1 1/8 miles over firm turf in 1:50.61 to claim a seventh win of her career. Most notably, Dalika determinedly won the Beverly D. Stakes (G1T) at Churchill Downs in August and triumphed at the Kentucky Downs Ladies Turf (G3T) in September.

Information provided by Equibase at time of entry.

Dalika broke from fifth place in the field of nine mares and mares and established herself as the 8-5 favorite from the start with fractions of 24.36 and 49.07 adventure rated second on the backstretch. Curly Ruth tried to challenge from the outside in the last corner but was quickly dismissed. At the head of the stretch, Dalika held a two-length lead over Adventuring’s pursuit when Perseverancia, who was down in seventh early on, recovered for the spot late in the stretch.

“What I’ve learned from watching (the late former jockey) Miguel (Mena) ride her is that you’ll just avoid her and she’ll give you her best run,” Hernandez Jr. said solid filly. I told (owner) Paul (Varga) after the race that she could easily have run a mile and a half today.”

“She’s been so consistent in her races since we got her as a two-year-old,” Varga said. “She really likes it here at Churchill. She has competed in 31 races of all distances in her career and has now given us 10 wins. She’s so tough on top. She was actually second seven times. This year in particular, she’s had a tough season. Every time it looks like it’s going to pass, it stays in the game.”

The order of completion was completed by sunny , Lake Lucerne , frivolous , Pass the plate Curly Ruth and vanishing law . wave of goodness was scratched.

Ahead of the Cardinal, Dalika finished last of six in the Harvest Stakes Presented by Mint Gaming Hall event on the Breeders’ Cup undercard Keenland.

“We just kicked out her last race at Keeneland in the fall harvest,” Hernandez Jr. said. “Things didn’t go her way that day and that wasn’t the Dalika that we know.”

Dalika, a gray or roan daughter of pastor from the Hurricane Run mare Drawn to run , was bred in Germany by the Ammerland Stud. She is the only stakes winner among six winners from seven of her mother’s foals. Your unrun foal is a yearling by forest spirit .

The content and style of this press release were edited by the staff of BloodHorse.

Al Cross: In politics, John Y. Brown Jr. was a reformer who delivered