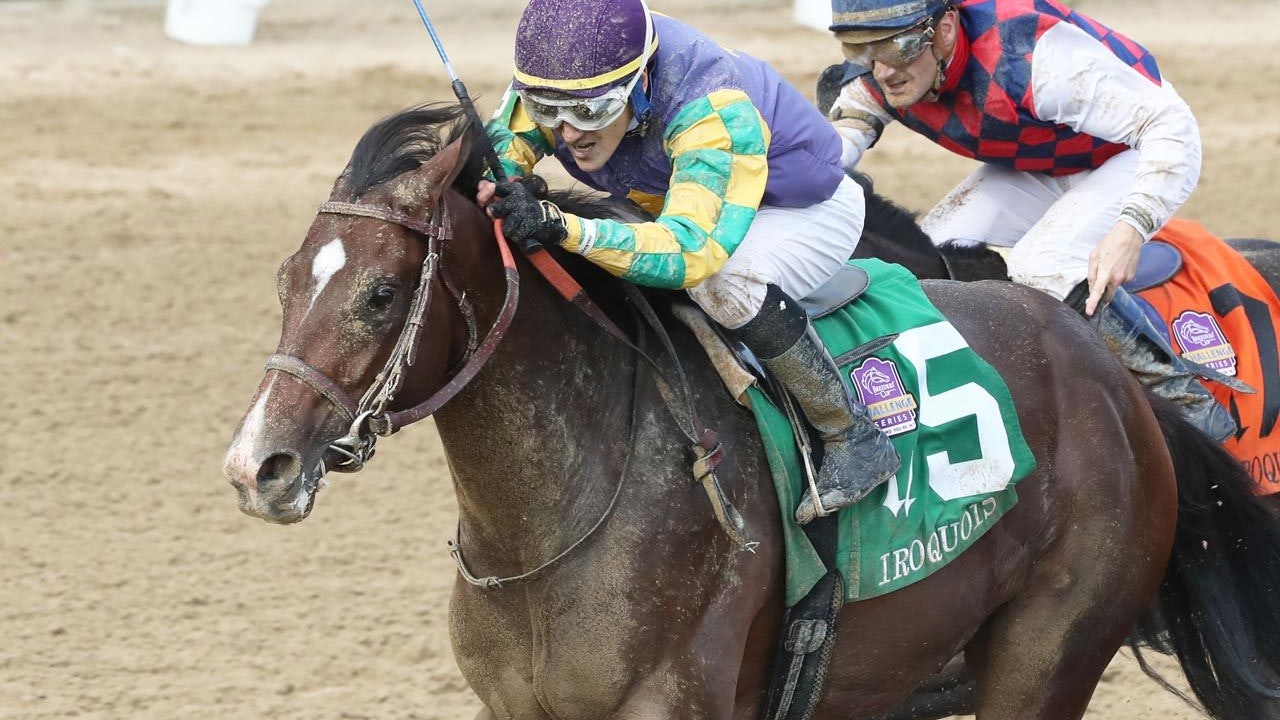 #1 CURLY JACK (3-1): Two for two on the course, led by a record in the Iroquois S. (G3) two back for Amoss. He finished a distant fifth place last time in the Breeders’ Cup Juvenile S. (G1) but faces a more sensible challenge here on a surface he obviously enjoys. Regular pilot Edgar Morales will be there.

#2 WESTERN GHENT (20-1): Broke his maiden with Maid claiming enemies and has been dusted by two stake fields in the meantime. The American Pharoah Colt is difficult to confirm at this stage in its development.

#3 DENINGTON (12-1): Graduated in style on the oval for Ken McPeek last time. The gun runner colt handled the sloppy sealed surface with ease on his last attempt and will be dangerous at a good price if there is moisture in the ground on Saturday. Regular pilot Brian Hernandez will sit in the stirrups.

#4 GIANT (12-1): A stakes winner who is a wild card for Asmussen on the main oval. The Not This Time colt was a fine winner in his lone run on the dirt of his life and could be any breed that would make his second run on the main strip after an attempt at Bourbon (G2) on the Keeneland turf. Corey Lanerie picks up the mount.

#5 RED ROUTE ONE (7-2): Second down to third place in the Breeders’ Futurity S. (G1) before taking a well-beaten fifth place in the Street Sense S in his final attempt on this oval. The Gun Runner son has fine foot rotation and can certainly make some noise late on as a top three contender with Tyler Gaffalione in the controls.

#6 PATH OF FREEDOM (6-1): Unbeaten by two lifetime runs on the turf for conditioner John Terranova. The bay son of Collected has done nothing wrong to date and is trying the dirt for the first time for a conditioner that knows how to recognize its runners. The presence of Florent Geroux in the silks is a huge bonus.

#7 HAYES BLOW (10-1): Finished a clear second place in the Street Sense S. (G3) on the surface and is considered an obvious competitor in the field for McPeek. The Connect youngster has improved at lightning speed in his life and appears to have pulled it all together, leading to his biggest test yet. Rafael Bejarano has the repeat order.

#8 INSTANT COFFEE (5-2): A fantastic debut winner at Saratoga before taking a hard fought fourth place in the Breeders’ Futurity (G1) last time out at Keeneland. The Brad Cox student continues to train well this season and seems poised to put in a great performance against this field while making only his third career start. Luis Saez keeps the mount.

#9 CYCLONE ACCIDENTS (8-1): Impressed by a dominant first win on the dirt at Keeneland last time out for Dale Romans. The Into Mischief youngster was a close third on the surface on the debut and certainly makes sense at this point with an expected move in the right direction despite moving furthest in the field. The $450,000 purchase has early speed and will force exit from the opening bell with regular pilot Joe Talamo in the stirrups.

Letters: Should Rattler have smoked a cigar in the Clemson win?

How the Fantastic Four took Double Dutch to new heights