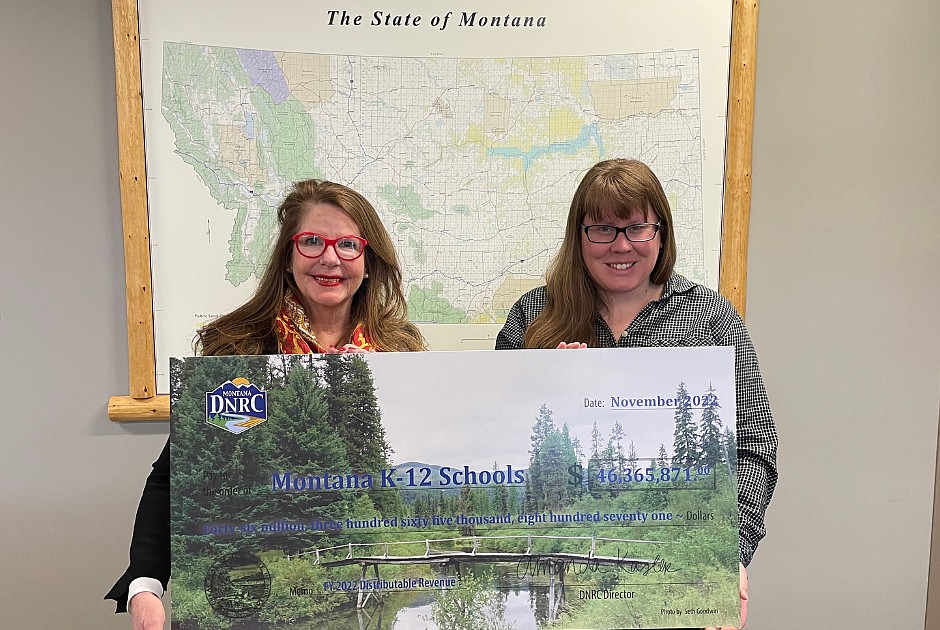 HELENA – As one of five members of the Montana Land Board, State Superintendent Elsie Arntzen accepted $53.7 million on behalf of public schools from the Montana Department of Natural Resources and Conservation (DNRC) at today’s Land Board meeting. Two separate checks were presented, $46.3 million from the Common Schools Fund for public schools and $7.4 million from the School Facility and Technology Fund.

“Our precious government trust lands work for our most precious assets — our students,” said Superintendent Elsie Arntzen. “The money made by our trust lands directly benefits all of Montana’s public school students while relieving the burden on Montana’s taxpayers. I am grateful to DNRC’s Trust Lands Management and my Land Board colleagues for continuing to put our Montana students first!”

This year’s $46.3 million equates to approximately $311 per student in our public schools. There was a surge in mineral and coal dollars which contributed to a large portion of these funds. Agricultural leases, timber sales, wheat, barley and hay, and grazing revenues also contribute to the Common School Fund. The OPI also received $7.4 million in connection with a riverbed rent payment. During the upcoming biennium, these funds will be used to enhance the debt service assistance program described in MCA section §20-9-367.

“I am incredibly proud of the work the Trust Lands Management staff is doing on behalf of Montanans,” said Amanda Kaster, DNRC director. “Their innovation and commitment to the sustainable generation of revenue from government administered trusts is demonstrated by the reliable funding we generate annually.”

During Superintendent Arntzen’s tenure, the following distributions were made available to benefit Montana public schools:

All government trust lands are managed by the DNRC Trust Lands Management Division and benefit public schools through the sale of timber, surface and mineral resources. The members of the Land Board are the state’s five constitutionally elected officers – the Superintendent of Public Instruction, the Governor, the Secretary of State, the Attorney General and the Commissioner of Securities and Insurance.

When Montana became a state in 1889, the Enabling Act established a large number of states supporting common schools. Today the state manages 5.2 million acres of surface and 6.2 million acres of minerals in state trust lands that benefit the Montana Common Schools.

Thanksgiving Travel Rush is back with some new habits | business