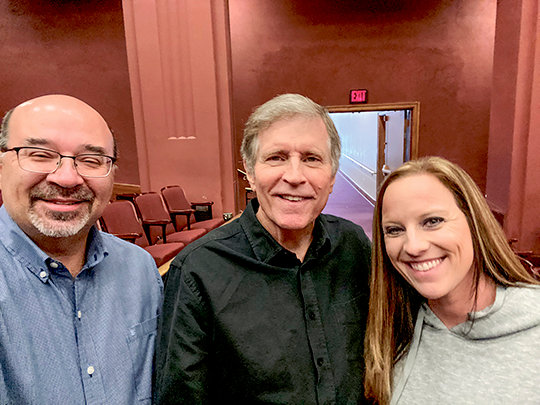 “We had this one part where we had the whole melody. In training he hit me in the nose because we are in such a small space”, joked Mücke. “He just put his hands up and made us play and it was really cool.”

Mücke’s chance to experience the moment came at the last second. Mücke said he was moved by Ticheli the night before when Ticheli realized there was a shortage of second clarinet players.

Muecke was one of seven Powell High School students selected to perform from 300 students and 80 high schools from Alaska, Oregon, Washington, Idaho, Montana and Wyoming in the University of Montana High School All Star Bands from 11th to 19th June Playing in Missoula on November 13th.

“So every song that was performed at that concert was written by Frank Ticheli and they got to work with him. For example, when you get glimpses from the composer, ‘this tune that this section is playing represents something,'” said Powell Band director John Fabela. “So they got direct information straight from the composer, which is very rare for us musicians.”

“It’s pretty incredible to watch. It gets kind of emotional because someone who’s world famous makes eye contact with my students and puts them in the right spot, that’s just pretty cool,” said Fabela.

Hayano was also a member of the percussion specialty department, where students learned Brazilian percussion from music professor Robert Ledbetter, who spent time learning the style in Brazil. Hayano said that in big band music, percussionists often didn’t have much to play, so she enjoyed her time in the group.

“So the drum teacher at UM was Dr. Bob and he was really exciting. We actually learned to play all the music without sheet music,” Hayano said. “So he had a bass drum and he would always play the rhythms for us and we would drum them back for him, and that’s how we learned to play as a group.”

Atkinson said he enjoyed the experience of being two hours from the Canadian border, seeing the tallest mountains he’d seen in his life, and working with “amazing conductors” and Ticheli, whom he calls “literally one of the greatest.” names in the music world.”

DeFoe Love also enjoyed the experience and the chance to watch a UM soccer game, despite not being a fan of the weather.

For all the students involved, the greatest moment of the event was listening to “Lux Perpetua” (Eternal Light). The play was written by Ticheli for a college that lost two student-athletes in an accident.

“The UM college band played it before any of the all-star bands showed up and played, and it was probably the most beautiful track most of us have ever heard,” said Bucher.

Fabela said this is the first time the University of Montana has tried an event like this. The response was strong enough that a third band option had to be added. He said if they brought in a musician “of the same caliber,” Powell High School would definitely consider again.