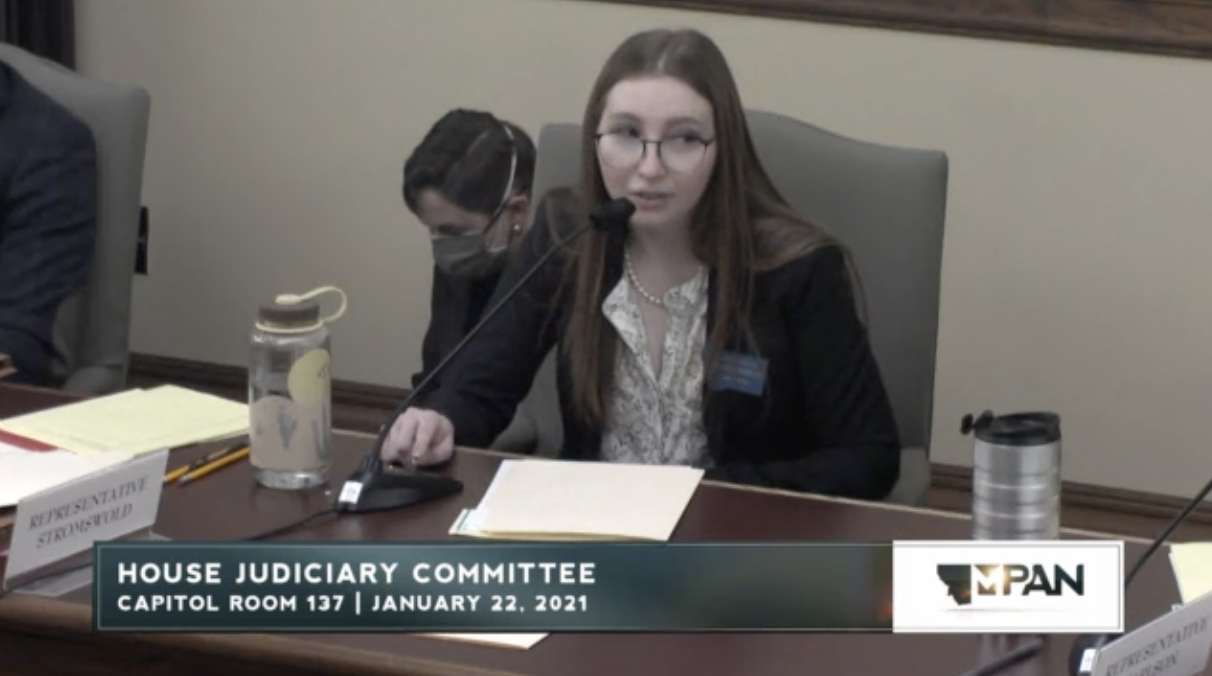 On Aug. 12, 21-year-old Billings Republican Assemblyman Mallerie Stromswold signed a letter retiring from her campaign and forwarded it to the Republican Yellowstone County Central Committee, which after a delay sent it to the Secretary of State Montana sent.

In theory, Stromswold would thus be eliminated from the ballot and the district party would choose a replacement to face Democratic nominee James Reavis, who is running in November to represent the central Billings district. In practice, the county party got as far as picking a new Republican candidate. But the person who beat Reavis in the general election was Mallerie Stromswold.

Now Stromswold says she will take her seat at House District 50 for a second time on January 2.

How she got to this point, despite volunteering to retire three months before the election, offers a glimpse of both the difficulties of holding elected office in her mid-twenties and internal tensions within the state GOP. Questions about Stromswold’s status and the precise reasons for her attempted withdrawal have swirled around the Capitol since lawmakers met for pre-session caucuses last week, especially given Stromswold’s occasional anti-her party stance in the 2021 session.

Stromswold said she tried to retire mainly for personal reasons related to her physical health and education, but has since decided to return to the legislature. That story hasn’t calmed the confusion over why and how things changed so quickly for her.

“People can do whatever they want with this information, but I’m here to serve,” Stromswold said in an interview with Montana Free Press this week.

The technical reason Stromswold will retain her seat in the legislature is that the county party missed a deadline. According to state law, candidates wishing to withdraw their candidacy this year had to submit signed papers to the Secretary of State’s office by 5 p.m. Monday, Aug. 15, a spokesman for the bureau said. Stromswold’s letter, which MTFP received through a public filing request, did not arrive until later that week. She said she had her letter notarized and handed it to the district party on the day it was signed, Aug. 12, and did not realize her withdrawal was not accepted until she received a call from the Secretary of State’s office.

“There were some misunderstandings,” said Tim Stark, the Yellowstone County party chairman. “We didn’t read the fine print that it had to be with the SOS by that date.”

The party had already held talks with possible successors, including Curtis Schomer, a unionized worker at the Sibanye-Stillwater Mining Co. who had just lost an elementary school in a neighboring district, and Edward Walker, a former state assemblyman who previously associated with the controversial dark money group Montana Growth Network. Shomer, who could not be reached for comment, was the final choice.

Walker said county party officials conducted phone interviews with candidates the week before the deadline, but audio quality was poor and finalists were asked to interview in person the following week. Walker did so, interviewing a sample of Central Committee members and Republican legislators from Yellowstone County, he said. The next day he heard that the party had decided to leave with Shomer, but by then it was too late to replace Stromswold. Walker said he organized support and raised funds for Stromswold when it became apparent she would be running the race.

“We interviewed a few people who were interested in whether that would have happened,” Stark said. “Obviously not, and yes, here we are.”

The late deadline coincided with a renewed interest from Stromswold in reelection. By the time she signed the resignation letter, she said she was recovering from health issues and was struggling to figure out how to handle both her legislative duties and her ongoing education at Montana State University. She also faced a potentially awkward reception at Helena.

While serving on the House Judiciary Committee in 2021, Stromswold was the only Republican on the committee to vote against two bills restricting transgender people’s rights and access to health care in Montana. On the House Human Services Committee, she tearfully defended a Democratic proposal that would allow minors to stay in shelters without parental consent, as most Republicans on the committee were willing to introduce the bill.

“My whole political ideology is that I don’t think we should control people’s lives,” she said in January 2021.

Their voices and strongly held personal views made them targets for right-wing activists. Far-right pastor and agitator JD Hall slammed her voice on transgender restrictions and presented her with the Freshman RINO Award.

Stromswold previously told MTFP she sometimes feels ostracized by other members of her party for her principles. She said even she was surprised she didn’t face a major challenger this year.

Asked this week if she volunteered to withdraw her candidacy for personal reasons or in response to pressure from Republicans, Stromswold said her election was “due to a mixture of many things.”

“My main reason was to focus on school,” she said. “But there were a few factors that didn’t make Helena the most comfortable place for me.”

Still, she said, if she doesn’t return to Helena to speak out on issues important to her, “who will?”

Walker, the former lawmaker, said he doesn’t get the impression Republicans are as unhappy with Stromswold’s votes as they are with her lack of life experience. Despite this, she felt she had done a good job representing the district. Stark said his understanding was that Stromswold wanted to go back to school but “got infected” again and must have decided to serve. It’s not often you see someone with that level of conviction at her age, he said.

“She’s made her decision and she’s going to serve out the term,” Stark said. “Lesson learned, if we submitted the paperwork sooner, we wouldn’t be having this conversation.”

Stromswold’s decision to serve out her newly elected term came as a surprise to some in Republican circles in Yellowstone County this week.

She said she now wishes Stromswold the best for the next session. Stromswold will serve on the House Fish, Wildlife and Parks, Transportation and State Administration committees.

“I hope that she is prepared and ready to be a part of the Republican faction,” Seekins-Crowe said.

A “step in the right direction” for CSCT

Over the past year, mental health professionals and public schools have expressed concern about changes in comprehensive in-school support for students in need. A post in Gov. Greg Gianforte’s proposed budget could be the first step in resolving these concerns.

The Montana Senate Committee on Committees, charged with assigning 50 lawmakers to committee assignments for the upcoming 2023 session, completed its selection Tuesday.

An eleventh-hour agreement to avoid a nationwide strike, reached in September, was temporary while awaiting ratification votes by workers represented by 12 different unions. Now some of these unions are back at the negotiating table with management.

The 6 Best Potential FCS Championship Matches of 2022 and Why