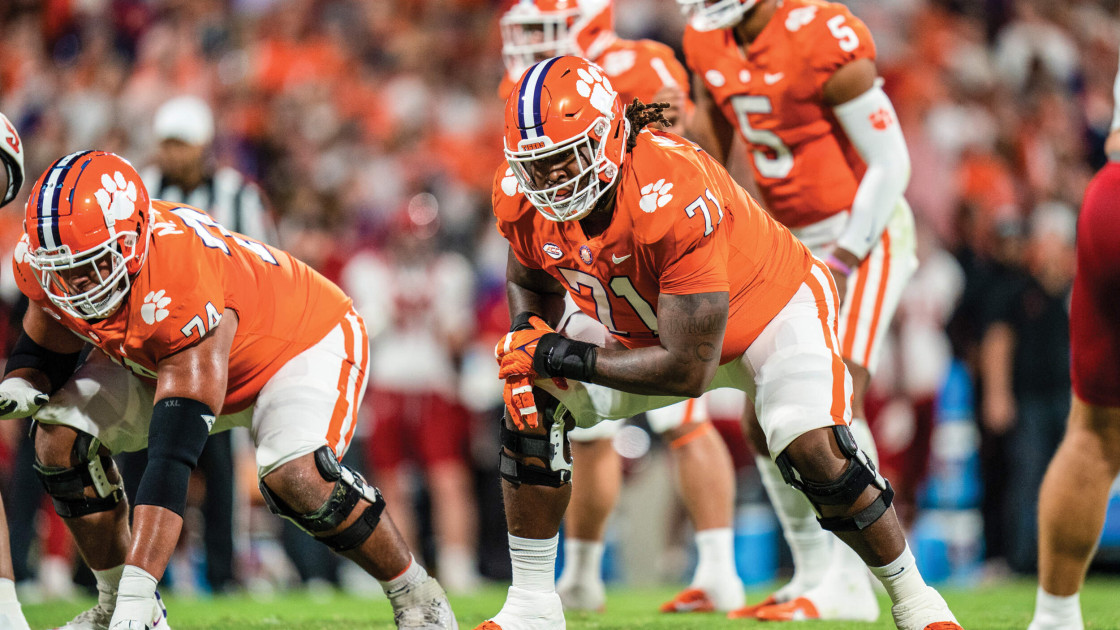 College football is a sport like no other in the country. From tailgating to the marching bands, the sport is distinctly different. The rivalry games played during Thanksgiving week also separate college football from the rest.

For Jordan McFadden, a state product, rival South Carolina takes on a life of its own.

“Growing up, I was always a Clemson fan. I never really liked South Carolina. This game means a lot to many people. I’ve never lost to South Carolina, so you want to keep it up. It’s a big rivalry. They don’t like us and we don’t like them. It would mean a lot to go undefeated against them.”

McFadden had a stint at Virginia Tech before committing himself to head coach Dabo Swinney and the Clemson program.

“Clemson does things differently when it comes to how quickly they offer prospects. I was committed to Virginia Tech and thought I would go there, but I have visited Clemson many times and was close to the atmosphere, facility and guys. Getting to Clemson was a breeze. It was close to home and the culture here is second to none.”

“He was who I looked up to and he was like my big brother. He definitely taught me a lot, like taking care of my body, exercising and eating right. He also helped me learn the pieces and was a big influence on my career. I would not be where I am today without the guidance he gave me.”

McFadden was recruited by Robbie Caldwell, who coached him for four years before retiring last summer. Former Tiger offensive lineman Thomas Austin now coaches him daily. McFadden has enjoyed being under the tutelage of both coaches.

“Coach Caldwell was very old-fashioned, but he is one of the most loyal people you will ever meet. He will criticize you as your coach, but he will stand up for you above all. As a player, you like to see that.

“Coach Austin played in the NFL for five years. He’s been where I want to be and he obviously knows the game very well. He’s really good at communicating with us and making sure he understands our thought process. He’s been really good for the entire offensive line.”

Last summer, McFadden represented Clemson at the ACC Kickoff in Charlotte, NC along with Swinney, KJ Henry and DJ Uiagalelei. McFadden spoke about the experience he had representing the program and the university in Queen City.

“That was huge… to be chosen by coaches and players as the guy to lead the team on media day was incredible. It’s crazy to think about how the staff and my team think of me… it’s a blessing. It was fun representing Clemson at media day. We met a lot of great people and answered a lot of questions. It was a great experience and I’m glad I could be part of it.”

McFadden has been at Clemson for five years and has seen a lot of growth in his time, but most of his growth has been outside of football.

“Since I got here, I’ve grown a lot as a man. I was super immature and wasn’t very serious. Being around men like Coach Swinney, Jeff Davis and all the other coaches, they help you mature and prioritize and they help you focus on doing the right things.”

McFadden learned to have an unwavering belief in himself thanks to Swinney and his story.

“Thanks to Coach Swinney I learned to believe in something… I heard his story of how he grew up, saw where he is now and won two national championships. Having an unshakable faith…is often seen in Clemson. Many people across the country tell us what we cannot do as a team or as a program.

“Many people in your life will tell you what you can’t do. It doesn’t matter what they think… it just matters what you think and have that belief in yourself.”

McFadden has been a dependable and dependable starter on the offensive line at Clemson for the past three years. McFadden was awarded second-team All-ACC honors last season, but his impact on the Tiger football program can be seen and felt off the griddle.

Someone shot at substations in North Carolina, shutting off thousands of power