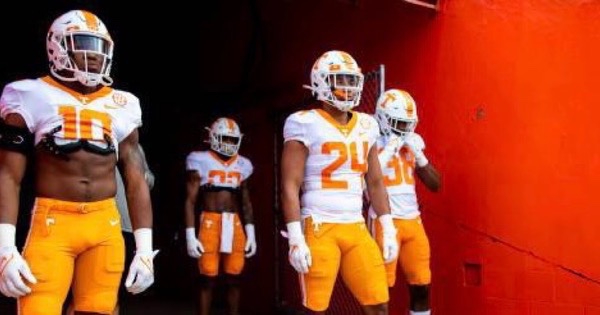 Tennessee lost Saturday night’s game to South Carolina before it even kicked off. Senior Linebacker Aaron Beasley said this week that it’s all about the mindset.

The Vols never properly prepared to face the Gamecocks in a primetime kickoff at Columbia’s Williams-Brice Stadium.

“We just felt like it was being given to us,” Beasley said Monday. “We felt like we didn’t have to go out there and work for it. We thought (they would) just lie down.

“You know, props to her. They came out, they played a great game. They played physically. They are a great team and they showed that this Saturday.”

Rather than get away with no work, Tennessee got worked in the 63-38 loss that changed everything about the 2022 season.

Spencer Rattler, after entering the game with eight touchdowns and nine interceptions on the season, completed 30 of 37 passes for 437 yards and six touchdowns. The Gamecocks rushed for 153 yards and three more touchdowns on the floor.

Beasley finished with five tackles, including three for the loss. But the Vols couldn’t get stops.

South Carolina had nine touchdowns on his 10 possessions while hauling a total of 606 yards in offense.

“Our biggest thing was the execution,” Beasley said. “We didn’t make the calls that we should have made. I feel the urgency, man, for the game. We didn’t have enough urgency.

“I thought we were going to get in there and things would just fall where they were supposed to. That’s not how college prom works. I think that was the most important thing, just execution and urgency.”

Tennessee trailed 35-17 in the second quarter, reducing the deficit to four after finally forcing a punt in the third. South Carolina responded with three straight touchdowns.

Once the Vols were on the ropes, they couldn’t get off.

“I think we just didn’t realize what was going on at the time,” Beasley said.
“The biggest thing was that we didn’t execute the calls that we’ve been making all year. They haven’t done anything spectacular or abnormal. We just didn’t do what we should be doing at the end of the day.”

Next up: Tennessee at Vanderbilt, Saturday, 7:30 p.m. ET, SEC Network

Tennessee was without a senior linebacker Jeremy Bankswho did not travel to the game with the Vols for reasons not stated by the head coach Josh Heupel.

Heupel said Monday he expects Banks to be available this week.

“JB, he’s a guy with a lot of energy,” Beasley said of Banks. “We would like to have him with us. But at the end of the day, we shouldn’t be influenced by what we look like.

“We’re supposed to go out there and do our jobs, play the game the way we can play it. We just didn’t do it on Saturday.”

Hopping for the Big Ten: Iowa plays Nebraska on Black Friday with a shot at the division title – Mitchell Republic